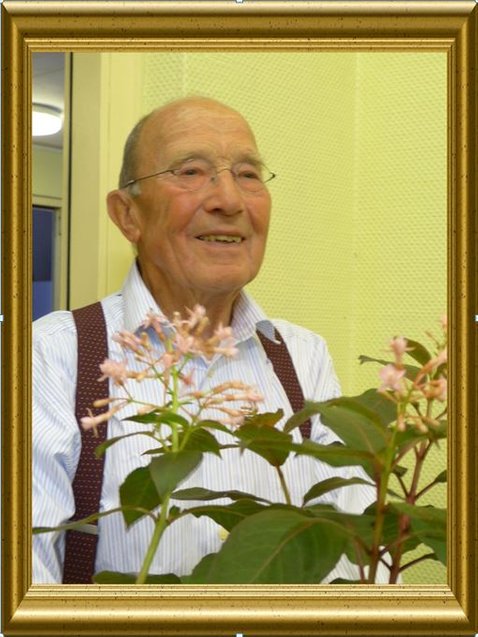 A well-known saying is "small but fine".

You could almost say that this applies to the less well-known hybridizer Arie Smits in the Netherlands.

Small in stature and extremely pleasant in dealing with his fellow human beings.

It is for today's standards a small collection of fuchsia cultivars that have been created by his hand but a collection of plants that the specialists among the Fuchsia enthusiasts appreciate and would not want to miss in their collections.        ( M.A. Soeters )

Many in the fuchsia world know Arie as just Arie.

For his close friends and officially it is Arie Smits, as also mentioned on the certificates and certificates of his novelties, but if there ever was a fuchsia named after him, then that should actually be called 'Arie Vantveer!

As the son of the ferryman Jap Smits, Arie was, as usual, called 'Arie', and they added 'clarification' van 't Veer, because Arie's were more, and Smitsen too. 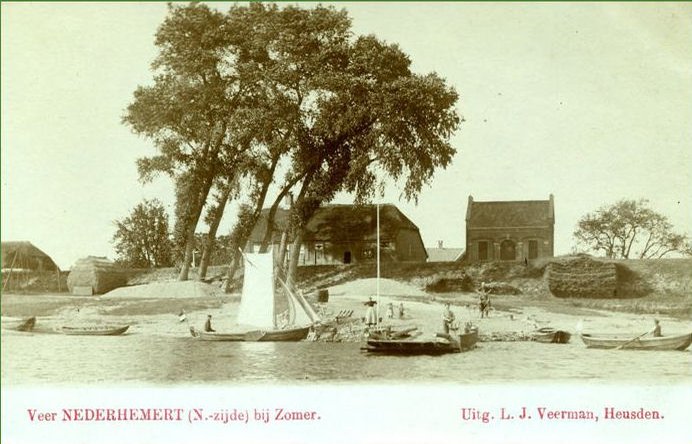 Like his fellow hybridisers, Arie has also named some of his novelties to, among others, his wife Catharina and his son J.K. Smits, which became the cultivar name 'Jeka Vantveer'.

The names 'Jap Vantveer', 'Cnelia Vantveer', 'Toosje Vantveer' and 'Manontje Vantveer' also appear in the list of plants that have been hybridised by Arie. For the second name 'Vantveer' was chosen because when registering new cultivars by the AFS only three words could be used.

That is why 'Van het Veer' was merged by Arie into 'Vantveer'. The AFS now allows the name to consist of more than three words if it is a Dutch personal name.

As a child Arie already worked a lot in the large garden of his parents. At that time it was very common in rural areas that they grew their own vegetables, fruit and potatoes and raised some cattle for their own use.

That this was no punishment for Arie is clear from the fact that his interest arose in the growing and flowering of plants. The acquired knowledge and experience would come in handy later on. After his high school days Arie worked in a tape weaving shop first as a cost price calculator and later as a manager. 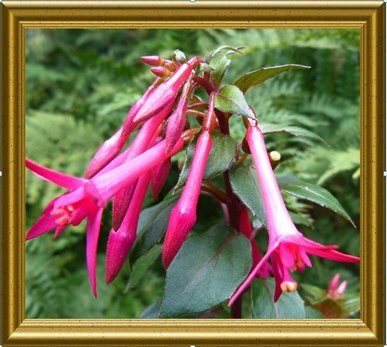 In a distant past Arie had a place free in his front yard and when visiting a supermarket in the village, he saw a nice standardfuchsia that he brought and put in the front yard.

Later that year, when visiting nursery Arends in Opheusden where he happened to buy some summer plants, he saw an enormous amount of fuchsia varieties and his curiosity was awakened and he asked the grower where those varieties all came from. His more or less agrarian origin must have played a role in that, because friskling with plants that seemed to him a bit. 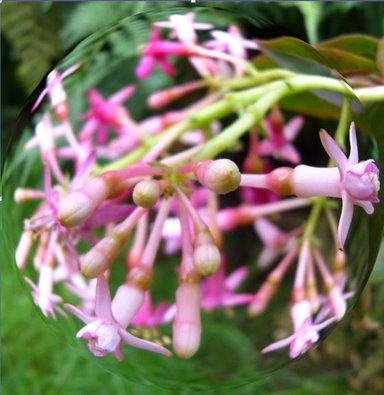 During visits to other fuchsia hybridizers and in the Botanical Group he had the necessary knowledge and skills to start. Soon he realized that the fiddling with aluminum tubes was not as easy as working with species with small flowers, so Arie built a greenhouse against the garage, the front and sides of which consisted of removable panels. When those separate panels were removed in the spring, there was a permanent greenhouse that consisted of a glass roof and walls of white mosquito netting. An ideal situation to hybridize without pollination by insects. And if there was something wrong in spite of it, then Arie applied the rule that a species powder gives almost identical offspring that could easily be distinguished from the other seedlings.

The first cultivar that Arie offered for an inspection was 'Catharina' in 1994, a cross between 'Gartenmeister Bonstedt' as a seed parent and F. procumbens as a pollenparent.

Arie named the plant after his wife.

This triphylla hybrid with its beautiful dark leaves became very popular among triphylla enthusiasts at home and abroad and you can still see it in many collections In 1997 'Double Dribbel' was approved, a cross between 'Whiteknights Pearl' and F. fulgens var. gesneriana. A pendant with a long flower tube in soft pastel colors that can withstand the full sun.

F. cylindracea x F. encliandra as mother and as pollenparent

F. paniculata but the plant was, as far as the flowers are concerned, the same as an already existing cultivar but had a lot of good other characteristics such as visitors to the garden of Arie could see.

For years he has grown this plant that grew more than two meters high and was incredibly rich every year dug out and wintered. But at an older age such jobs do not get any easier and Arie has left him outside. He survived a mild winter and the future will show what happens when the winters are stricter. 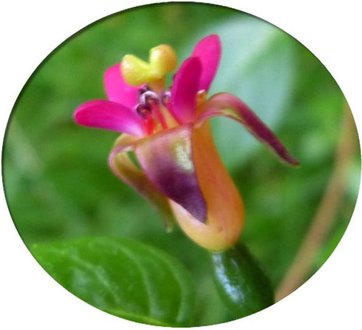 The majority of Arie's plants are crosses between botanical fuchsias and often that small-flowered species such as F. encliandra. Yet many plants are very popular with enthusiasts.

So you still see 'Toosje Vantveer' and 'Jeka Vantveer' in the collections of growers and enthusiasts. 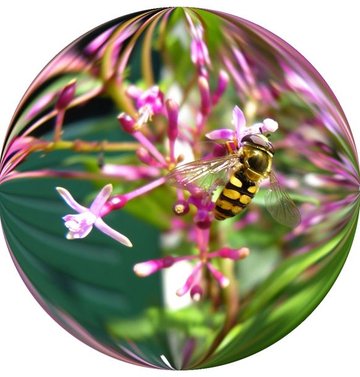 Arie recently introduced to the inspections a new success number of his hand 'Minipani' a plant that he had for years and which he did not really think he should come into circulation.'Minipani' is a cross between F. encliandra and F. paniculata. The flowers were too similar to F. paniculata and somewhere Arie was right about it but the plant had other good qualities for the fuchsia lover.

It does not become as large as F. paniculata, about 60 cm, but flowers abundantly with the lilac-shaped lilac purple bunches with flowers, and is very easy to care for a cross between botanical fuchsias.

Hybridizers and acquaintances of Arie persuaded him to have the plant inspected.

The plant was nominated in 2012 and made a big advance in the collections of enthusiasts at home and abroad within two years. The breeders also took care of the plant and are cultivating a white and pink variety .

From stories of hybridizers it appears that the plant grows and blooms in a light spot on the windowsill and in a moderately heated greenhouse.

That Arie is not just working on his own is clear with the introduction of the cultivar 'Procath' in 2014.

This plant is a crossing made by Arie between his favorite plant 'Catharina' and F. procumbens.

This plant has a lot of yellow in the flowers and can be a road to yellow fuchsias. Because it is not exactly a richly flowering and beautiful growing plant, Arie decided not to have him checked but to register with the AFS and to bring him into circulation. He sees a lot of possibilities in this plant, but given his advanced age it seemed better to make the plant available to hybridizers who want to make use of it.

In 2015 Arie also put 'Manontje Vantveer' into circulation with the same intention. 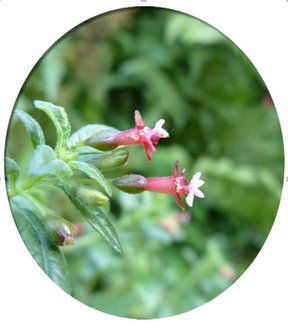 When crossbreeding with species, the chance of success is smaller than with cultivars, and if it succeeds it is often end pedigree because many offspring are infertile.

But "Never Give Up" which does not work this year, maybe next year,

but the harvest remains so naturally limited.

If you are critical - and you have to be - the number of disappointments is great. 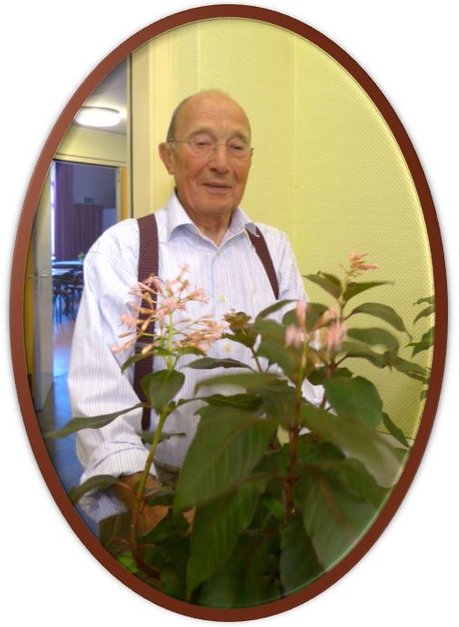 The Cultivars of Arie Smits

All the names of the cultivars of Arie Smits are mentioned above in the order in which he brought them into the limelight.

Photos of these cultivars can be found under the button "Photos".