THe masterclass period, The pantri hybriden. 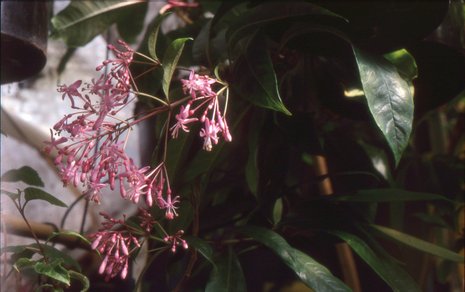 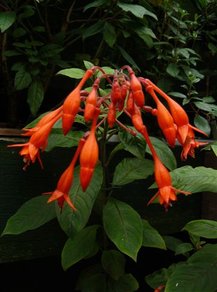 "Dreams are there to be realized, but that is also possible ?"

Any self-respecting hybridizer may have thought about what he would like to realize in the fuchsia area. Many hope for a good inspiration or a portion of happiness when crossing species and cultivars. There will also be those who deliberately start to realize their dream but eventually drop out because it does not succeed immediately. But it has also been proven several times in Dutch fuchsia history that an at first sight unattainable goal was achieved by finding the right way and perseveringly persevering.

That is how Herman also perished. Herman saw the plume-shaped bunches of small flowers of F. paniculata and the bunches of long flowers of F. triphylla and their descendants. It conjured up associations of large clusters, that is to say, screens common fuchsia flowers. Undoubtedly he then made the decision for himself whether that was possible or not.

Whether he was convinced that it was possible at the moment he started, or if he wanted to be sure that it was not possible?

These are the secrets of a hybridizer!

As a starting point for this drift-forming project Herman naturally started with the two spray formers, F. paniculata with its very small flowers that are very difficult to pollinate, and often have pollinated themselves before opening.

As a pollenarentr F. triphylla did service which is not the easiest species to realize anything. The fact that both come from different sections of the fuchsia family did not make it any easier.

Many pollinations will have been there and with it many seedlings that did not show the desired result, and were removed from the scene.

In the end, in the mid-1980s, Herman selected a seedling that met his wishes.

Vibrant, graceful flowers lilacless in color on elegant clusters, self-branching and easy in culture. Especially the shape of the bunch, spread and branched like a screen and different from the bunches of the parent plants F. paniculata and F. triphylla was one of the things that made Herman decide to introduce this seedling in 1987 under the name 'Small Pipes'. '.

Naturally, Herman had taken a first step towards a new chapter in his hybridizing activities.

He had of course already convinced himself that this newcomer was fertile and therefore suitable to continue to build a new line of cultivars. Other crossings in this area such as; 'Uillean Pipes' and 'Miep Aalhuizen' turned out to be sterile. 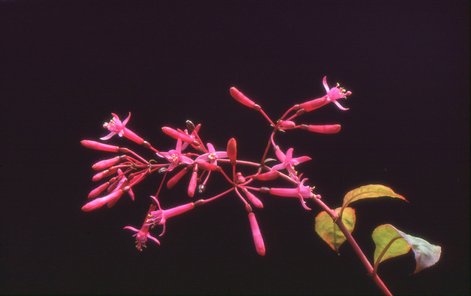 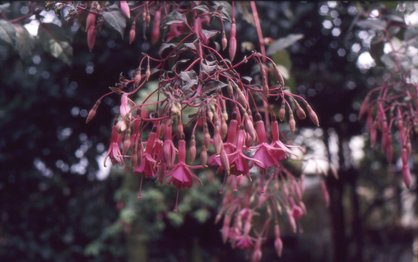 The agreements made in the hybridizing group about the use of individual results ensured that this unique combination was not used by other hybridizers in the first instance. 'Christ Driessen' was published in 1988 as a purple-pink successor to 'Small Pipes', for which 'Small Pipes' was used both as a seed parent and as a pollinator.

'Chaos', which was launched in 1989, was also a cross between

'Small Pipes' as a seed and as a pollen parent, and with its pronounced real fuchsia flowers in spread screens, it fully reflected Herman's original dream.

The name 'Chaos' owes this plant to its extremely exuberant bloom and the less clear screens.

'Pan', the next pantri hybrid that was created, came out in 1990 and by the crossing of 'Small Pipes' as a seed parent

(F. paniculata x F. triphylla) with F. magdalenae as a pollen parent another species was recorded in the pantri hybrid.

This is later reflected in the descendants of 'Pan'.

The addition of the hard-to-winter species

F. Magdalenae did not give insurmountable objections to the culture of 'Pan'. Just overwinter when all F. triphylla cultivars are sufficient. 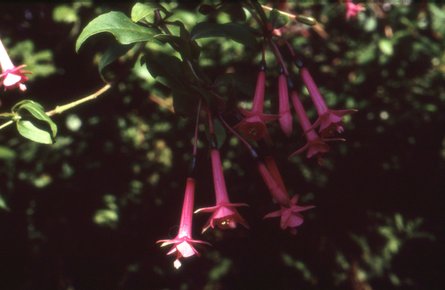 Distant orange pink flowers with a slightly purple glow in filtered light, standing on sturdy stems. With large velvety bronze green leaves with striking red veins and petioles. The bunch formation of 'Pandean Pipes' is somewhat more limited, probably because once again a triphylla cultivar has been crossed. 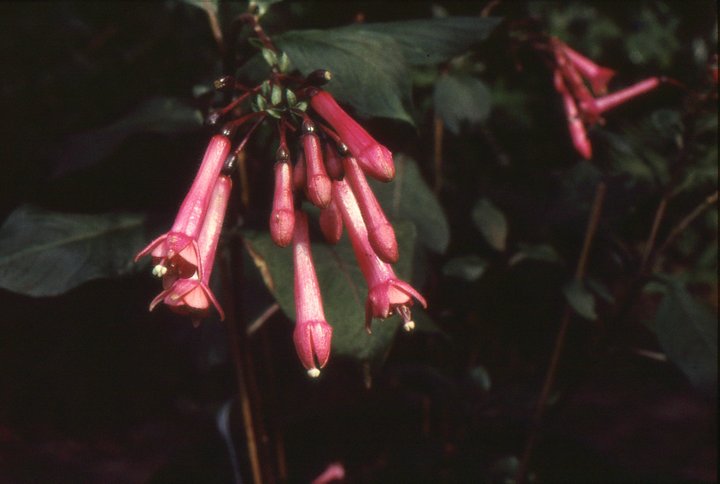 In 1996, Herman brings the new cultivar 'Gerharda's Panache'. Initially the cultivar would be called 'Panache' but this name was already registered in the register of the American Fuchsia Society, so the stable name 'Gerharda's'

The name 'Panache' which means "A plume with diamonds" perfectly expresses the qualities of this plant. Herman was then well aware that with this crossing between 'Small Pipes' and 'Pan' he had selected a true era of experimentation, and especially patience.

He had created a plant with which, in addition to the desired plume-shaped bunches with normal fuchsia flowers, the way was open to realize this desired appearance in all conceivable shapes, colors and sizes of flowers. You could compare it to Haute Couture from which all kinds of ready-to-wear models can be derived.

The fact that you would like to use such a cultivar, with so much effort and time, for your own new offspring, that almost speaks automatically. 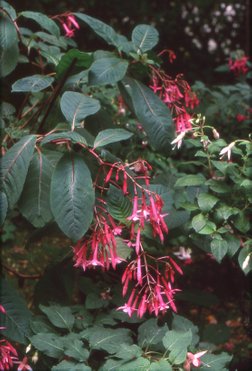 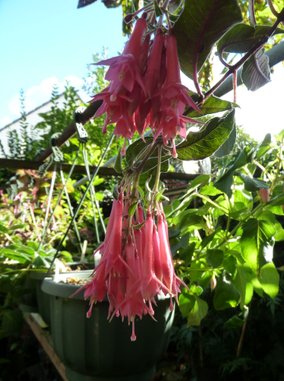 Now 20 years later 'Gerharda's Panache' is still being used extensively in the world of fuchsia hybridizing, and many cross-hybridizing projects are planned with this plant.

You can also say that there is indeed a "Panache" era, but also that the Masterclass or a lesson has been passed by an expert.

Now that the use of 'Gerharda's Panache' was possible as a parent plant, there was a world open for Herman to cultivate new cultivars, or rather pantri hybrids as they are now called. But again Herman did that in his own way. He did not deny the breeders basic concept when crossing.

"You need species to create something new".

He used for the next generations to cross therefore plenty of species or cultivars of which the proportion of species in the pedigree was high.

Because of this way of working, many new pantri hybrids were created in various shapes, colors and sizes, a total of 39 pieces. 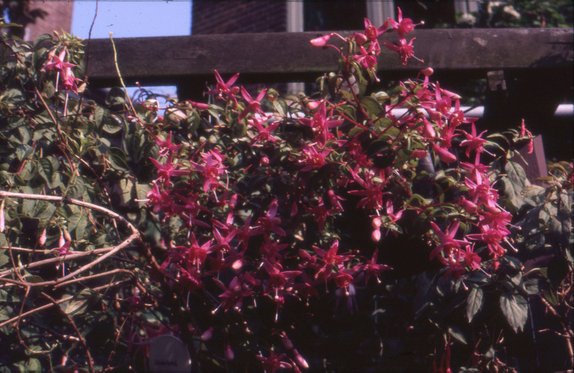 Describing all the pantry hybrids in this story would become too much of a good thing. In the chronological list of Herman's plants at the bottom of this hybridizers' portrait, all cultivars with F. paniculata x F. triphylla lineage are mentioned in a different color.

An anthology from Herman's assortment of pantry hybrids.

An abundant bloomer with medium-sized flowers in rich clusters that grows and flowers easily.

And like most panthyhybrids after flowering, it is even more beautiful because of the bunches of jet-black round berries on the plant. 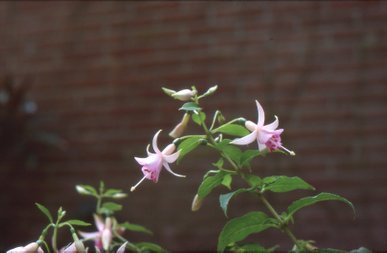 With beautiful, somewhat plumes with light red triphylla flowers that like triphylla cultivars can withstand heat and sun.

A plant with beautifully shaped pastel-colored flowers with a pronounced edge on the sepals.

A plant that quickly makes sturdy twigs in each leaf axle so that flowers can be seen along the entire branch.

The flowers stand on sturdy stems and look like daffodil flowers. 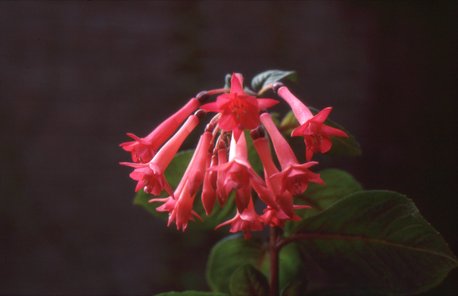 A pantry hybrid in dwarf form with triphylla like flowers but that is much easier to grow as a triphylla hybrid. 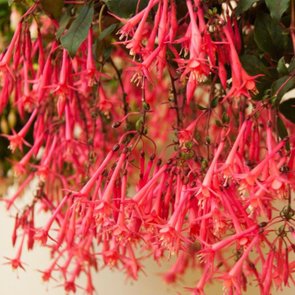 A fast growing plant whose bunches of tubular flowers stand out beautifully against the dark green leaves with a purple hue that have a striking purple-red midrib.

Good resistance to the sun and gives beautiful bronze green leaves in a sunny location. In addition, this plant forms tubers.

Flower stalks of the cluster and the branches are dark red which, together with the velvety leaves, gives a separate cachet to the plant. 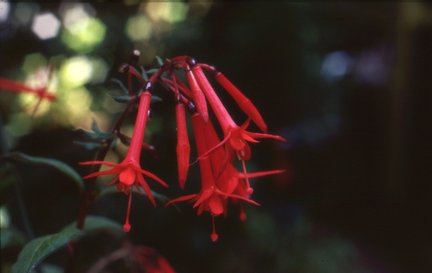 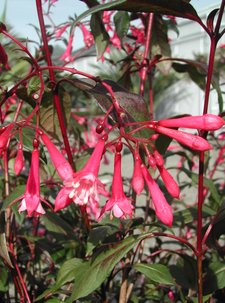 Gives a sea of soft pink to pink flowers, which has been grown as a bush and regularly topped, a delight to the eye.

Also in 2005, 2006 and 2007 several pantri hybrids from this hybridizers hand appeared, each with its own character, form and appearance, with which Herman not only indicated that a very successful cross is sufficient evidence for the masterclass, but that there is a lot possible with this unique crossing of F. paniculata and F. triphylla and its application in further hybridizing work. 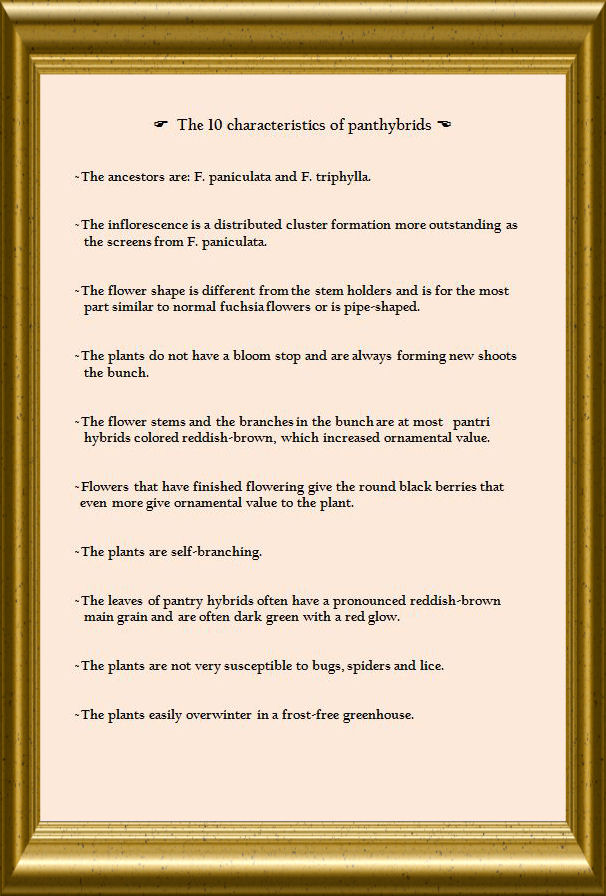 In chapter 10 the cultivars of Herman J. de Graaff the names of the pantri hybrids are mentioned in a different colour.

Read more on: 9 Naming and familiarity.