The cultivation of bonsai fuchsias 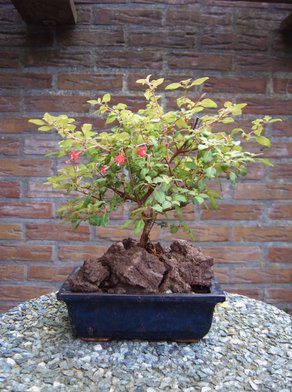 The word 'bonsai' comes from Japanese and is composed of the Japanese words 'bon' (= tree) and 'sai' (= flat bowl).

Bonsai in Dutch means 'tree in a flat dish'.

The first bonsai was formed more than a thousand years ago, and in the State bonsai gardens of Japan and China there would still be specimens of more than 1000 years old. Only at the end of the 18th century, during the World Exhibition in Paris, the first bonsais were shown in Europe.

A plant that is suitable for growing as a bonsai is the fuchsia and especially the varieties with slow growth, small leaves, short stalk members and generally small flowers.

In the Netherlands there are two ways to grow fuchsias in a pot with a limited soil package:

The intention is to grow a as big as possible and a free flowering plant in a schort time.

With the growing as such, one has only a few years of experience and which age one

Fuchsia limited in its growth is not yet known.

Bonsaifuchsia:       here the plant grows up in a very limited soil package of a very filled one

With normally grown fuchsias everything from the plant is subordinated to flowering, but with bonsai fuchsias everything is subordinated to growth. In addition, we can choose a certain growth method and everything may be visible in the form we want, such as rootnecks, stem, branches, foliage, flowering and berries. To become. growing a bonsai fuchsia does not always have to be small, I have seen them from 1.20 m high and about 20 years old.

In bonsai there is the following classification of styles: a. upright trunk.

Fuchsias lend themselves perfectly to the growth style with exposed rinsed roots. The roots of young trees in the wild are hidden in the ground. As the tree ages, they gradually rise above the ground surface. They cling to the earth, as it were, and seem to embrace them, and also give the impression of great old age. As with other bonsai plants, you can create a certain shape with wire.

The bonsai dishes and pots.

These are generally very shallow. Make sure they have sloping edges so that the plants can be easily removed. A bonsai safflower also needs a larger scale or new soil. Make sure there are holes in the bottom for the drainage.

The dishes must also not be too big, the plants can always be placed in a larger scale. They grow too hard in too large a scale. It is also possible to place several plants in a dish, but take plantlets from the same cultivar. Otherwise it becomes too fuzzy and the bonsai effect is gone.

Do not plant them too close together otherwise the roots will grow together so that they can never be separated if they are transferred to a larger dish. The attack on the roots is then so great that one or more die.

This must be done in a lot of light (but not in the sun) and well ventilated, otherwise the stalk members will be too long. Indoors does not want this, it is generally too dark there. Growing in a greenhouse is also less suitable, since it is often too hot there because there is also shielding it is too dark.

The best place to rear is simply outside in a lot of light but out of the sun, looking out for too much rain. The dishes must be turned regularly, unless they have to consciously grow in one direction, for example in a cascade (fan).

If you start growing from a cutting, place it in a small pot of about 6 cm. Here, the cutting is formed into the desired shape. According to your choice, it can be a shrub, a little tree, a fan or a different shape. You will find special bonsai forms in books about bonsai, such as in the book 'Bonsai - The complete manual' by Harry Tomlinson.

A bonsai can also be grown from an older plant. Then start in the autumn (mid September). First prune the plant in the right form and reduce the water supply. Then wait 2 to 3 weeks and then take the plant out of the pot. The earth is shed or scratched from the plant. The (bare) thick main roots are then visible at the top. Pot the plant in the relevant bowl, bring the plant back to the growth and let it grow in the winter. In the following year we will switch to the final pruning for the right form. 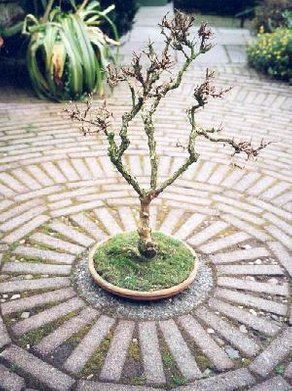 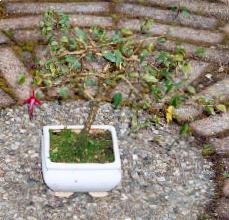 Very suitable for growing as a bonsai

Please note that a fuchsia bonsai is more difficult to grow as a normal fuchsia. The plant does not want to grow well because it is in a smaller soil package and therefore can absorb less water and food.

In the spring the plant will grow reasonably, because the temperatures are not so high. Then prune regularly to make the plant more bushy, this will benefit the flowering. Try to prune that the plant maintains its desired shape. Remove the larger leaves in the center of the plant regularly.

As a result, the new shoots growing through the center get the chance to grow and there is less evaporation. This also gives a better exposure in the heart of the plant and there is less chance of the occurrence of botrytis. In addition, less food is then included, which slows growth.

Remove the plant once a year from the dish and cut some of the roots away, which also gives a slower growth. This is best done in the spring when it needs to be re-stuck. If one wants to let a branch run out in a certain place that one has determined, then the following possibility is available.

Look for a hidden button (here has been a leaf pair before), with a razor blade carefully cut a slice of about 5 mm above the knot in the bark of the branch (about 1/3 of the circumference and about 1 to 2 mm deep) ). Only do this with lignified twigs (see adjacent picture). 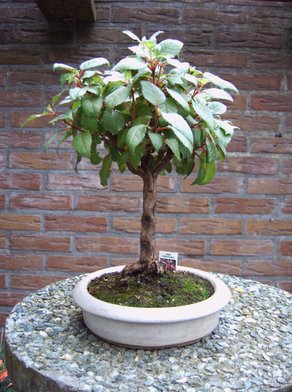 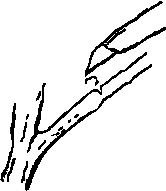 Use a potting soil that stays well aerated and that can hold a lot of water. Because the plants are generally in too small a soil package, one will have to fertilize very regularly. I work a lot with leaf fertilization and give little manure through the irrigation water, because there are also many ballast substances that can accumulate in the potting soil. A good base is 1 time in the 2 weeks in the irrigation water (a 1/2 gram / liter).

To prevent the roots from burning, the pot root must then be wet. Also give 1 to 2 times a week leaf fertilization of 1/8 gram / liter of water. In order to prevent burning of the leaves, the plant should not stand in the sun. Use fertilizers of a high quality, because there are less ballast substances in them. I myself have a good result with Plantprod 20-20-20 and once a month a water dose containing 1/2 gram / liter of bitter salt (magnesium). Watering and leaf fertilization is best done in the morning. If one does this in the evening there is more chance of the formation of botrytis or root rot, since the water does not evaporate at night and is poorly absorbed by the plant. In cold weather, the plants can be kept somewhat on the dry side.

In a fuchsia bonsai the same diseases and pests occur as in normal fuchsias. However, the bonsais suffer more from red spider mites

(can be seen from the dull discolouration of the leaves), since they are generally drier, which is why they spray more often.

If there are leaves to yellow with green spots, the plants have a lack of magnesium.

No manure will be from the beginning of September. The plants are pruned in mid-October. Do not prune them too short, in the spring it is better to prune again.

A good temperature for wintering is between 5 and 8 ° C (for a triphylla hybrid it is about 2 ° C higher, and that should be a lot of light). High in the greenhouse is a good place for triphylla hybrids, but beware: they dry out earlier than plants in a regular pot. 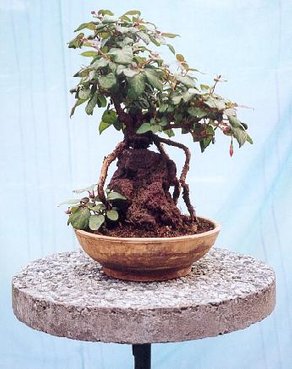 Together with the new series with flowers of the encliandra type:  Oulton Chaffinch - Oulton Crown  - Oulton Empress

The most important points for the growing of fuchsia beans here at a glance:

3 ~ In the first few years try to shape the plants as well as possible, flowers are then still not important