The overwintering of certain fuchsias is not always easy. Difficult winterers are for example various botanical fuchsias (species), the triphylla hybrids and the WALZ music instruments. There are also a number of cultivars that can easily fail in winter storage due to a weak root system. You may also be able to help such 'difficult winters' through the winter by following up on the following methods that I have successfully tried out.

It is advisable to make cuttings from these difficult winters in late August and early September, especially if the plants are only one season old.

Young plants should NOT be pruned. If the plants have grown too large for winter storage, cut them back early, but certainly not later than mid-September. It is also advisable to give these plants some nitrogen fertilizer. Young plants should also have more light and heat in the winter season. Place them as high as possible in the greenhouse. In order to prevent botrytis, fallen leaves must be removed, while the soil in the pot must be slightly damp.

When you overwinter the plants in a room, put them as close to the window as possible. Overwintering in a dark cellar is only possible if a lamp is lit above the plants.

For example, do not leave the lamp on for 12 consecutive hours, but divide the illumination using a time switch over 24 hours in periods of 15 to 30 minutes. Experiments with flower growers have shown that periodic lighting is more effective.

Older plants can be overwintered by two methods:

a. Put the plants unpruned in the greenhouse, but first remove fallen leaves to prevent botrytis.

This method takes up space, but gives a longer flowering.

b. Prune back the plants two weeks earlier than normal, but do so no later than the last week of September.

Prune them on two or three eyes of the branches that have been formed this year and leave the leaves. That gives beautiful bushy plants.

After pruning, it is advisable to give the plants nitrogen once again to ensure good regrowth.

Do NOT put the plants in the greenhouse after pruning but leave them outside as long as possible, but keep an eye on the frost.

This gives a much better regrowth and less chance of botrytis. Make sure that they do not get too wet because of the rain.

This second method takes up less space but gives a somewhat shorter flowering. 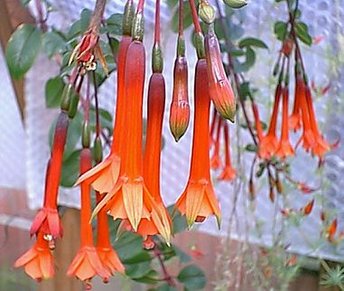 F. magdalenae is a species that is difficult to overwinter

For both methods, the plants must be lighter than the not difficult to overwinter cultivars.

Do not put them under a table. The more light a plant gets, the shorter the internodia (stalk members) remain and these grow into sturdy bushy plants.

For collapsing or placement in a dark basement without exposure, difficult overwinterers are not suitable, they will certainly die there.

Turn the plants a little warmer, in a higher place in the greenhouse. Should the plants still stand on the ground, put them on a PS insulation board. As a result, the cold does not so absorb and the potting soil becomes less cold.

There is still the opinion among many fuchsia enthusiasts that old plants can cope better with the cold than cuttings. However, old plants can handle a long cold period of 5 ° C better. But I have seen old plants go to death in a room where it had frozen five degrees, while cuttings survived in the same space.

Because the plants have sprouted again, they also require more water than newly pruned plants. Make sure that they do not dry out. But if the temperature drops, they certainly should not be too wet. After all, wet soil is much colder and this can cause root rot.

In the spring when the growth is good again (at the end of March), the untrimmed plants (method a) are significantly cut back to the first or second eye of each branch. The tops of these branches generally produce very nice cuttings.

The plants cut in the autumn (method b) are pruned to the first glance of each young branch. This pruning method also applies to young plants. In this way you form beautiful bushy plants.

This pruning method also applies to the crown of standard.

If possible, prune on a nice sunny day so that the cuts can dry properly and there is less chance of botrytis.

'WALZ Bella', 'WALZ Banjo', 'WALZ Klavier' and 'Hinnerike' (crosses containing the species F. magdalenae that are hard to overwinter in the past few years) have been successfully hibernated in the greenhouse in accordance with method b for several years.

Some common cultivars that also have this problem are; 'Chang', 'Ming', 'Jaspers Kleine Ding', 'Countess of Aberdeen' and 'Eleaonor Leytham'.

To prevent botrytis, a fan is continuously running in the greenhouse to keep the air moving. If the outside temperature allows this, the greenhouse will ventilate. 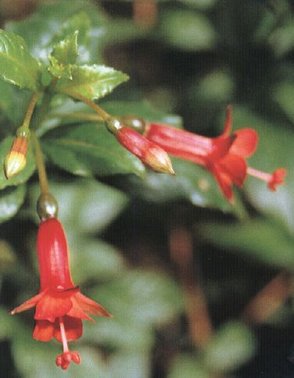 'Hinnerike' is a cultivar with overwintering problems

Wintering of fuchsias with a weak root system

These plants have a lot of fine roots and no thick fleshy roots. These fine roots rot away easily with a combination of cold and moisture. What I have tried with such cultivars is the following. Of several of these varieties one is potted in a plastic pot and one in a stone pot. The pots and plants were of the same size. It appears that the roots of the plants in the porous stone pot better ventilate, making the water management much easier to control.

With an equally large amount of water, the roots in the stone pot slowly grow, while they do not grow in the plastic pot. With a stone pot, a lot of water evaporates through the pot wall, which keeps the soil more airy.

Also a lesser water supply to the plants in the plastic pots had no good result.

With plants that are in a plastic pot, it is harder to get oxygen at the roots than with plants in a stone pot. These 'breathe' through the pot wall. Make sure that in the autumn a poor airy soil is used when potting.

The lighter it is, the better oxygen can reach the roots and this prevents root rot 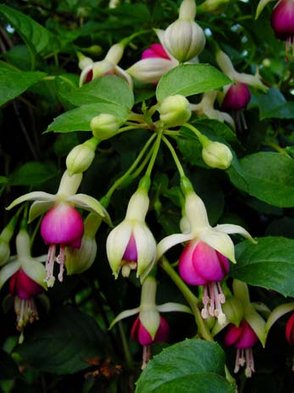 You can save all this effort by taking cuttings from the difficult winters and throwing away the old plants.

The young cuttings form nicer plants, especially if you put a few cuttings in a pot. Remember that in a polystyrene tank of 0.40 x 0.60 m, there are 70 cuttings, while on the same surface only 6 to 8 pots with old plants can stand.

To get a good rooting of the cuttings, I always use the end of August / beginning of September and let the temperature in my greenhouse rise to 36 ° C. There is no plastic film or the like over the bins, but the bins must not be in the sun.

The door and all windows are closed, making it moist enough in the greenhouse, possibly a day or 5 or in a lot of sun a newspaper about the cuttings.