The starting period as a aspirive fuchsia hybridizer. 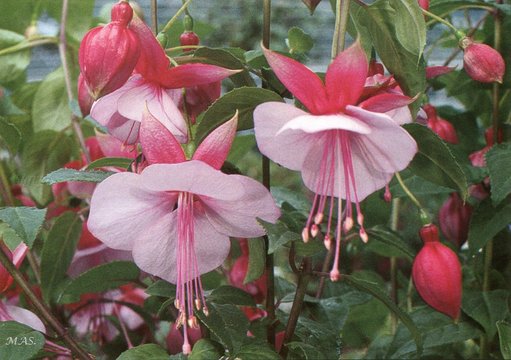 In this period as a starting hybridizer in fuchsia, Herman used, just like the few fellow hybridizers, 'La Campanella' as mother plant for his crosses and some other cultivars that were available in the Netherlands at the time, such as 'Lena',

'Duke of York', 'Brutus', 'Impudence', 'Rose of Castille' and many others.

The contribution of Botanical parents came in that time of 'Speciosa' a natural crossing of F. fulgens and F. splendens. 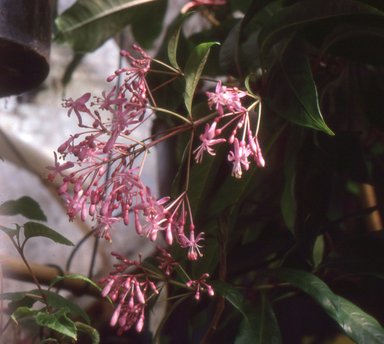 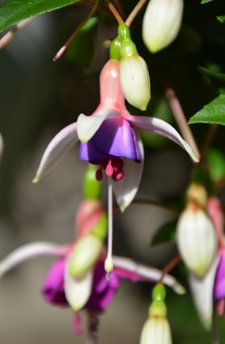 In that period at the end of the seventies in the early eighties, keeping botanical fuchsias (Species) and their use for hybridizing was not so easy to take for granted. They were scarce to obtain, difficult in culture and a lot of knowledge about this species was missing, which was one of the reasons for the founding of the Botanical Group. 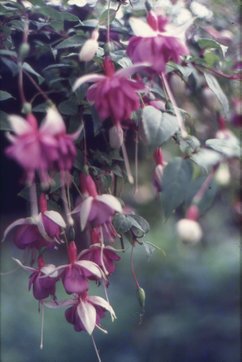 The first fuchsia cultivar that Herman brought to the market for lovers was in 1976 the cultivar 'Troika'.

A beautiful double flower with three colors in the crown.

As a mother 'La Campanella' was used and the pollenparent was unknown, that is to say Herman did not make a pollenparent known for safety reasons. At that time, because of the lack of proper protection of the pollinated stamp, it was not realistic to name a pollen parent,

After all, nature could also have helped a hand.

Other cultivars from that period also all

'La Campanella' as a seed parent with an unknown pollen parent from 1977: 'Le Berger' and'La Bergère' 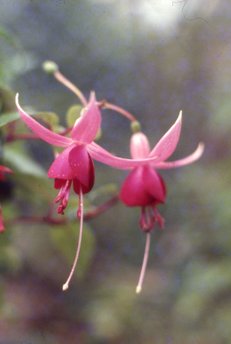 In this period until about 1985 Herman also introduced some cultivars of which both the seed and the pollen were unknown. These are the cultivars 'Flim Flam', 'Baroque Pearl' ,Westergeest' and 'Keukenhof'. 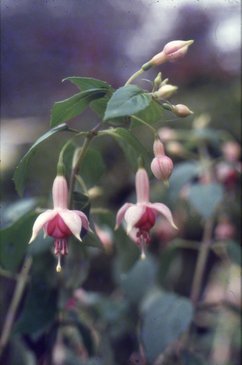 If you sow, you obviously know where the seed comes from, and in most cases also where the pollen comes from. If you have said that neatly on the label with the seedlings, then there is nothing to worry about until the house cat chooses the box of seedlings to romp.

Then you can only guess and it is wiser not to mention hybridizing parents.

If something like Herman had happened to him now, his wealth of knowledge and experience would probably have been enough to be able to identify the parents.

In this early period, in 1979 Herman realized his first cultivar with a saucer-shaped crown the cultivar 'Loeky'.

A targeted cross between 'Joy Patmore' and 'Impudence'.

This cultivar, named after his wife, finds Herman, now decades later, still his most beautiful cultivar. 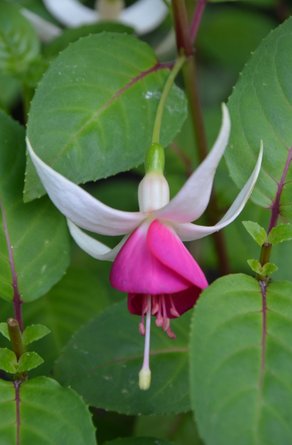 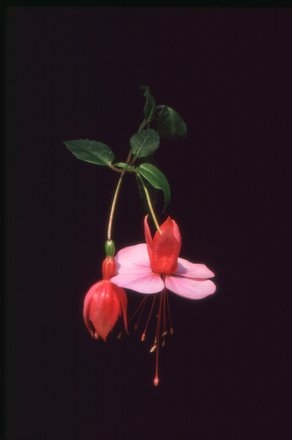 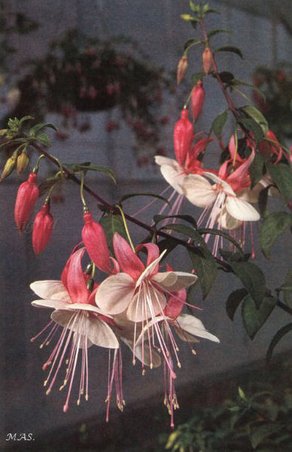 In this early beginning of his hybridizing work (1976-1977), Herman selected from the sowing of a berry of 'Speciosa', which is a natural cross between F. fulgens and F. splendens, three plants.

One of them, 'Je Maintiendrai', was initially rejected. The inspection committee found the color scheme too hard.

But after a number of years the cultivar was brought back from England, where he was in circulation, and again brought to the inspection in 1985. Out of frustration Herman took another seedling to be rejected by the commission the name of this seedling was' Flim Flam '.

The second from this berry 'Oranje Boven' came into circulation in 1980. The third came almost immediately on the inspection in 1977 and was given the name 'Machu Picchu'.

With 'Machu Picchu' Herman gave his business card to the global fuchsia world with which his name as a hybridizer was established. 'Machu Picchu' was in a short time one of the plants that you encountered worldwide in all collections of lovers and that still applies. 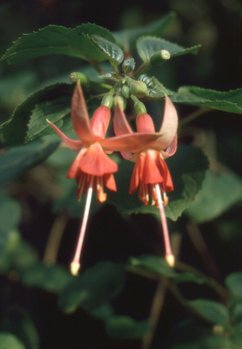 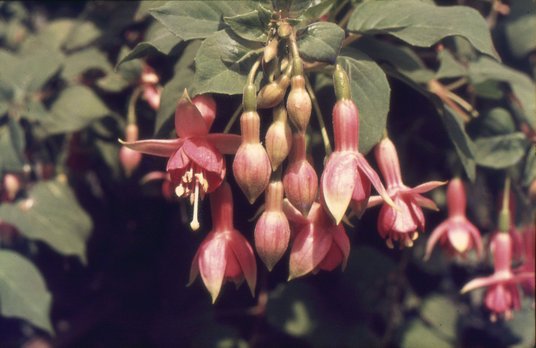 Stimulated by this success with 'Speciosa' Herman used it in several crossings. 'Speciosa' as a seed with

'Ting a Ling' as a pollen producer yielded the somewhat special cultivar 'Greenpeace'.

Because of its special color palette, in which green also played a striking role, it was not only the particularly well-fitting name, but also the individual appearance of the plant and the flowers that made 'Greenpeace' a success.

Many stories circulated about the culture of 'Greenpeace' about how the buds were opened, the location, the wintering and even flowering in the winter. But all that did not work out that the plant still finds a loving spot in the collections of many fuchsia friends. 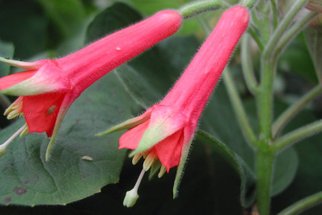 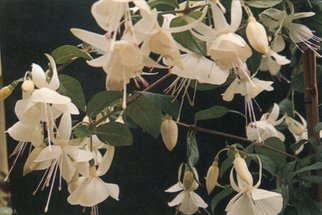 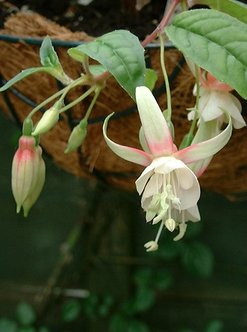 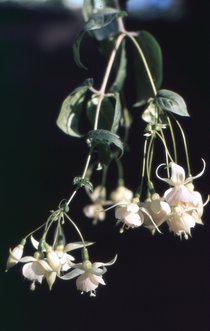 In the summer (left picture) and in the winter (right picture) Greenpeace has a very light pink crown in winter while the flower and calyx show more green and white. In the summer the flower has a clear red blush, depending on the location.

Another cross with 'Speciosa' as a seed but with F. splendens as a pollen parent, which was already present as a pollen parent in 'Speciosa', resulted in the cultivar 'Space Shuttle'. This very rich flowering cultivar with for that time quite unusual flowers became a decisive success from its introduction.

What Herman did not realize at the time was that this cultivar, like the spacecraft to which he named him, caused a breakthrough.

The yellow that was clearly visible in the tops of the sepals, the tops of the petals and in the stamens and pistle was quite unique at the time and that made the cultivar fairly popular with many fuchsia enthusiasts.

But also the unusual appearance of the plant with the flowers that were somewhat similar to F. splendens at the same time ensured that many of those fanciers became more interested in fuchsia species. 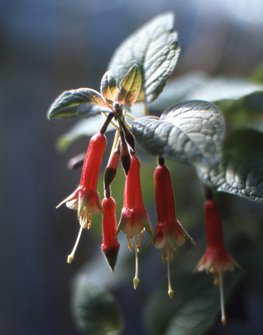 It was at the end of this period that gradually more fuchsia species got a place in the garden and in the greenhouse of Villa Gerharda. In 1983, Herman introduced his first cultivars, of which both the seed and the pollen producer were a species.

Both cultivars bore a lot of attention at the time because of their long pipe-shaped flowers and the beautiful contrast with the dark leaves. With this name references to Scottish bagpipes gave Herman an extra dimension to these plants for the Anglo-Saxon fuchsia lovers who also took care of the cultivars en masse. The then almost new color of

'Northumbrian Pipes' was at the time rather different from the existing range and made this plant spread worldwide. 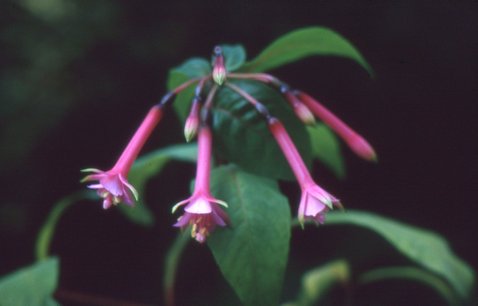 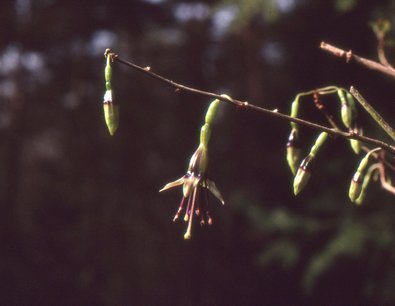 Also a second cultivar with saucer-shaped crown came out in 1983. 'L' Ingénue 'a cross between' Loeky 'and' Mazda '.

The name 'L'Ingénue' which means female innocence is deliberately given to this crossing as a counterpart to 'Impudence' which means shamelessly.

Also in 1983 saw the cultivar with the smallest flower that Herman ever hybridised the light. This was very appropriately called 'Kaboutertje'.

'Kaboutertje' is a cross between 'Minirose' as a seed parent and 'Whiteknights Blush' as a pollen parent. The small bright red flowers are very stubborn on stiff flower stalks.

Not all introductions from this period are mentioned here.

In chapter 10, in the list of introductions of Herman, the other cultivars from this period are shown.