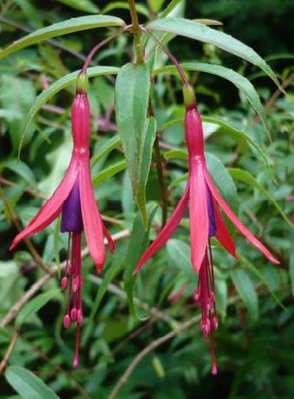 Many of our fuchsias are sensitive to low temperatures, and will be a bit frosty but with difficulty survive.

If we want to keep them after the summer season until the next year, we will have to overwinter them free of frost.

One fuchsia is somewhat more sensitive to low temperatures than the other. So many fuchsias with F. triphylla in the pedigree have it

in winter, preferably not too cold. Other fuchsias can have a bump. In particular, fuchsias with blood from the Quelusia section (for example cultivars from F. magellanica) can tolerate a severe blow of cold.

Over the years a large number of fuchsias have been introduced with hardy properties.

This one fuchsias can overwinter in the garden with more or less care. A (certainly not complete) list of fuchsias with hardy properties can be found at the bottom of the page.

The advantage of hardy fuchsias is that we do not have to reserve space in the greenhouse in winter, because they can just stay in the garden.

We then have almost nothing to worry about for months. They must be treated in the preparation for the winter season as many other garden plants. Covering a little can never hurt. And we prefer to prune back early in the spring when the worst cold has gone.

When we talk about winter hardiness, we are talking about the ability of a plant to cope with winter conditions without too much damage. It is a trait that is hereditary and genetically quite complex.

If we cross two plants with each other, the hardy properties are often inherited in an intermediate way, that is to say, each plant contributes roughly for half of its own part. However, the situation may also arise, that at one particular crossing one of the two parents is strongly predominant.

All in all, therefore, pretty complicated to predict the winter hardiness of the result of certain crossings.

Much research has been done on the winter hardiness of plants. This can happen under laboratory conditions or

It is a far from straight forward research, because the survival of a plant depends on so many factors during the winter.

A softwinter is certainly not conducive to the chance of survival, because the plants then at varying periods with a pleasing, almost spring-like sun, followed by some frost, again and again have to defend against the much less pleasant wetness and cold.

In the assortment of hardy fuchsias you will not easily encounter the species F. hatschbachii. Yet it is one of the best hardy species.

This species was discovered in 1985 in Brazil by the world's most famous specialist in fuchsia: Dr. Paul Berry.

He is therefore only relatively short for the fuchsia lover available. F. hatschbachii is named after Gert Hatschbach, Director of the Botanic Museum of Curitiba, a city in Brazil.

Opinions were initially very divided on the winter hardiness of F. hatschbachii. In the literature we find that this species would be very sensitive to low tempratures, or a bit sensitive, or that might endure a few degrees of frost. But we also find that this species would be very hardy. It is even mentioned that it is one of the best hardy fuchsias, which would not die to about -10 oC above ground. All in all very confusing.

If the latter were to be true, F. hatschbachii would be perfectly suitable for conquering a place in the garden in the Netherlands as well, with the additional advantage that the species proves to be resistant to fuchsia gall mites.

F. hatschbachii also has an attractive, sturdy and shiny leaf and beautiful small, single flowers. Because of these properties, it seemed worthwhile to subject the hardy properties to a closer examination.

Plant material and growth conditions. A two-year old F. hatschbachii, grown in a pot, was planted in the garden in Ohé en Laak in the spring of 2012, in the area where it is coldest in winter. No special protective measures were taken during the winter.

The plant has been tested for winter hardiness for two winters. In the first winter, the winter of 2012-2013, it has been quite cold for a long time. The following winter, that of 2013-2014 was relatively soft 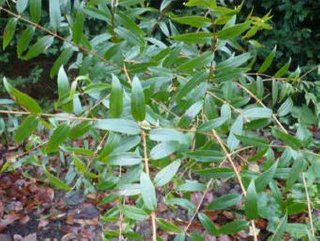 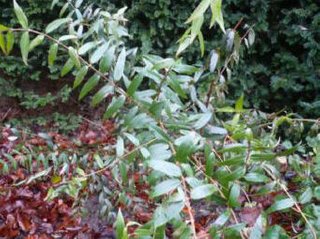 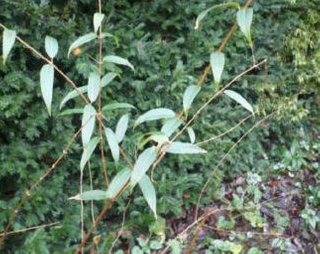 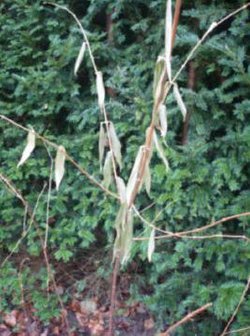 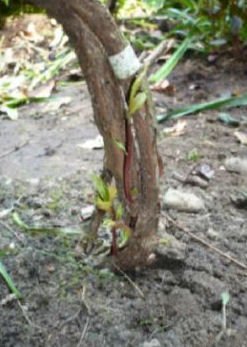 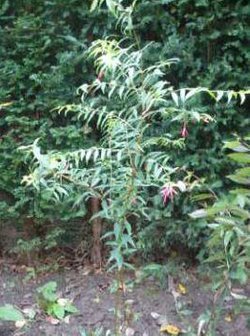 The temperature in the garden is measured continuously at two places at a height of 1.5 meters, protected from direct sunlight.

The temperatures measured correspond perfectly to the temperatures of the weather station "Ell", which is located about 10 km north of Ohé and Laak as the crow flies.

The damage to the leaves and twigs caused by the frost has been assessed visually.

In Fig.1 the temperature trend is shown during the winter 2012-2013. From time to time there was a thin layer of snow, which offered little protection.

The pictures 1-4 on page 4 are representative of the appearance of F. hatschbachii during this winter.

At the end of October 2012, a first short frost period began, at which a minimum temperature of -4 oC was reached. On 9 December the temperature went down for 24 hours to a minimum of -9.2 oC.

F. hatschbachii did not sustain any significant damage.

From the end of December F. hatschbachii began to lose some leaves.

From January 10-27, 2013, a significant frost period occurred. During this entire period the temperature rose only a few hours to just above the freezing point. F. hatschbachii then fell noticeably. The plant lost more and more leaves, and the twigs became more and more brittle. It is not clear whether this can be directly attributed to the long-term low temperatures, or whether dehydration has occurred as a result of the combination of frost, wind and sun.

In February some short periods of frost occurred. On 13 March, a temperature of -13 oC was even measured.

was too much for F. hatschbachii. The plant then died to about 15 cm above ground level.

At the end of winter several short periods of frost occurred, with the temperature dropping to -3 oC. This lasted until April 10, after which a very late spring finally arrived.

At the end of May F. hatschbachii started sprout, at a height of 10 cm above ground level, and then reached a height of about 1.8 meters. As can be understood, the plant started to bloom late. 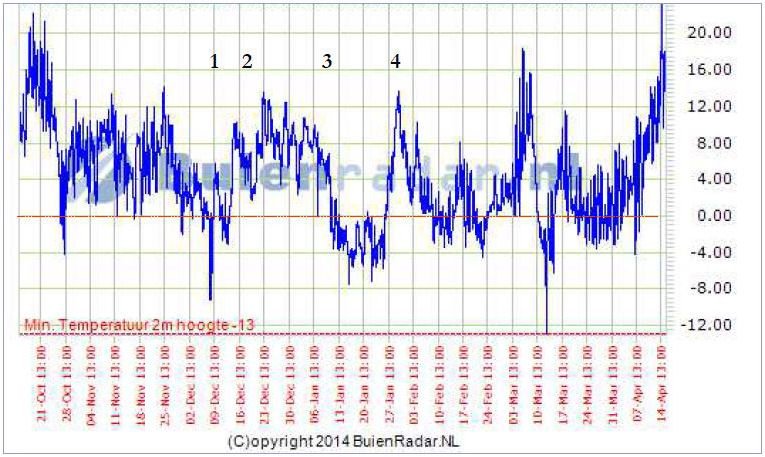 The date is shown on the horizontal axis.

The temperature is stated on the vertical axis (degrees Celsius).

The figures in the figure correspond to the numbering of the photos above.

The winter 2013-2014 was very mild by Dutch standards. This of course created an opportunity to continue the winter hardiness test, after a previous cold winter, under condition that is rare in the Netherlands (until now?). 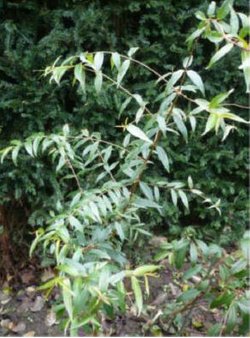 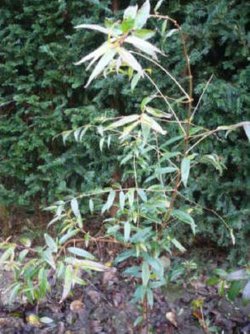 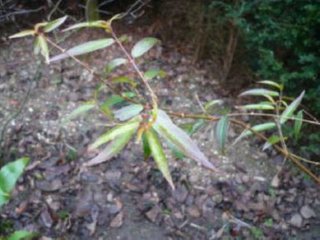 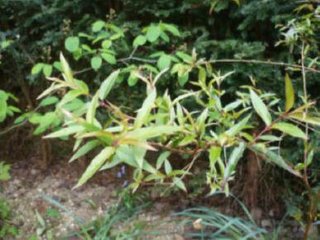 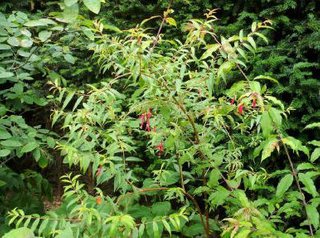 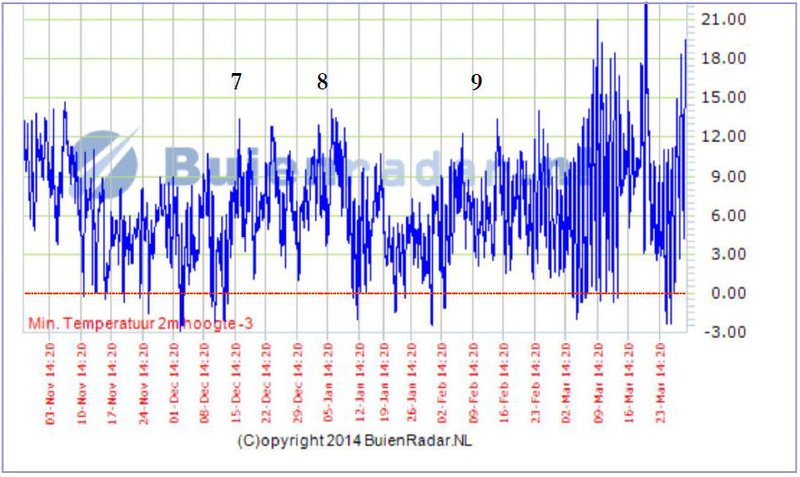 The date is shown on the horizontal axis.

The temperature is stated on the vertical axis (degrees Celsius).

The figures in the figure correspond to the numbering of the photos above.

In Fig. 2 the temperature trend of weather station "Ell" is also shown for this winter. The temperature in the garden has never been below -3 oC during the whole winter, which can be called exceptional. In December 2013 the temperature dropped four times to -2 to -3 oC. In the period January - April 2014, the temperature dropped 15 times below freezing, but never lower than -2.5 oC. This was also clearly visible on the pond: only a thin layer of ice was formed each time.

Photos 7-10 give a representative picture of F. hatschbachii during this mild winter.

The plant has lost some leaves during the winter. In that respect, the plant did not perform better than in the severe, preceding winter. Kwakkelweer apparently does little good. At the end of the winter some leaves were still present. For a real winter hardy fuchsia, that is of course not really exceptional in such a winter. Other winter hardy fuchsias, especially those with magellanica blood, have easily survived this mild winter.

F. hatschbachii started sprouting again at the beginning of March. He showed the first flowers again in early May. 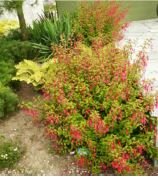 F. magellanica ‘Riccartonii’ in the gardens of

Conclusions regarding the winter hardiness of Fuchsia hatschbachii

F. hatschbachii proves to be excellent hardy. Both the twigs and the leaves of a well-hardened plant can withstand a short period of frost, with a temperature of -9 oC, without being seriously affected. A period of frost of 14 days with a minimum temperature of -7.5 oC is, however, required too much. The plant dies down to about 15 cm above the ground, but will survive just like many other perennial hardy garden plants. After a long, severe winter, regrowth will cause some delay.

There is of course much more available in the field of hardy fuchsias!

Fuchsia hatschbachii is a good winter hardy Fuchsia species with beautifully shiny leaves. However, this species will produce less flowers than some other hardy fuchsias. If you want an excellent winter hardy fuchsia with a spectacular bloom, but less beautiful leaves, then I can recommend Fuchsia magellanica 'Riccartonii'. The choice is yours.

This article is an adaptation of an article previously published in The Fuchsia hybridizers Initiative, July 2014: On the winter hardiness or F. hatschbachii (M. de Cooker). For references refer to this original article.

The original article can be found on the websites of Euro Fuchsia, Fuchsiavereniging Limburgs Belleke (www.fuchsiazoeken.nl)

Below is a list of a number of hardy fuchsias that have been admitted by the British Fuchsia Society to shows in the category 'Winterhard'. This list naturally does not cover the total range of available hardy fuchsias, but it does give a good impression of the many cultivars that have hardy properties.

For more detailed information about hardy fuchsias, please refer to http://www.nwfuchsiasociety.com and the book 'Winterhard Fuchsias' by Gerrit van Veen.

in England. They have in England (where the winters are often slightly milder than in the Netherlands)

certainly survive 5 winters outside, and bloom in July, or at the latest in early August.