If you have made a list of the hybridizers of this caliber, with no less than 166 cultivar introductions, in chronological order of all plants and mention the descendants, you will not only get a clear overview of the work of the hybridizer, but also a beautiful picture of the time of the development of the fuchsia hobby in the Netherlands and related to the development of the NKvF.

But you also see a line in the development and progress of the hybridizing group and the botanical group of which Herman, together with Hans van der Post, was one of the founders. 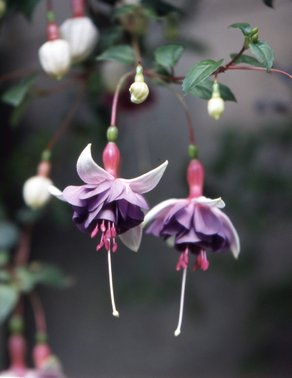 The hybridizing work of Herman can therefore be divided into a few periods.

But it is true that Herman from the start as a fuchsia hybridizer made use of features that he had literally received from home. One of those characteristics is his observing ability.

From the beginning, Herman knew exactly what was and was not going on in the Dutch fuchsia world and later on far beyond. He followed trends closely and quickly knew what the fuchsia lover prefered during certain periods.

He also noted the developments abroad where, following the Netherlands, the scientific work of John Wright was left out of consideration, more and more species were used in the hybridizing work.

Another feature that he gratefully used was something that many people had trouble with when reading some descriptions about fuchsia cultivars. Herman had an exceptionally good sense of perception where the coloring of cultivars was concerned.

Not everyone in that area has gotten the same qualities from home and often the eyebrows were frowned as Herman wrote that he saw a gray hue or blue nuance in the basic colors of a cultivar.

Many times he used this gift when choosing the parents of his breeding products. His friend, the hybridizer Lutz Bögemann, also had that exceptional quality of recognizing colors, which he used, for example, in his attempts to make a so-called reverse fuchsia with blue sepals and a red crown.

Perhaps they have strengthened or stimulated each other. 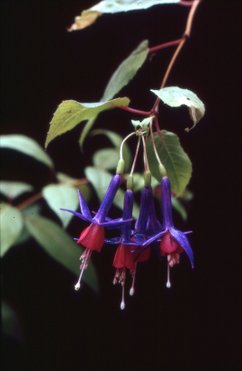 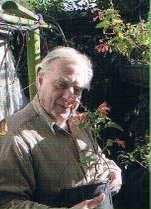 The smell test of a Fuchsia

Another sense that Herman would like to use in his hybridizing work was his nose.

Given his preference for fragrant flowers, every new cultivar was tested by him or they smelled. It was and still is one of his wishes to realize this in fuchsias.

Undoubtedly he has done research on this but until now he has not succeeded.

It is a logical reasoning that one would think that someone with such background and education, and with experience in refining daffodils, would work with species from the very beginning. Nothing is less true.

At the time that Herman started hybridizing, there were not as many species available as now. And caution also began Herman with 'La Campanella' as a parent plant because he had already seen many results from other breeders with this plant and was amazed at the wide variety of flower shapes and colors of the offspring of  'La Campanella'.

In other words, Herman deliberately used 'La Campanella' and other cultivars used by hybridizers because their good properties for hybridisation were known. He was also well aware that he could not answer for mentioning the father at the crosses of his early years. At that time, no good method was known to isolate the pistil after pollinating so that the father's name was never 100% certain.

Only at the end of the seventies, the Dutch hybridizers receive from the English hybridizer John Wright a method to isolate the stamp after pollination. 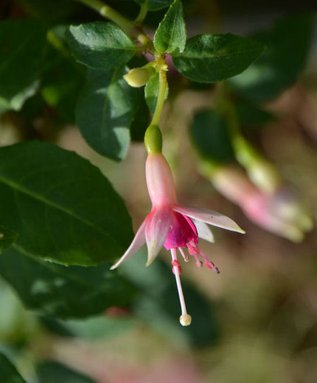 Up to now, Herman has brought 166 fuchsia cultivars to the market. A respectable number, admittedly, but if Herman had the same knowledge, experience and science in the early days of his fuchsia career, which he has now gained after many decades, it would probably have been less.

Read more on: 3 The initial period as a prospective fuchsia hybridizer.