Less burden of vine weevils by other hybridizing method

In the 2008 summer season, my collection of fuchsias such as additional photos showed a lot of damage from a hailstorm on 23 July. My car parked in front of the house was also one of the cars in our neighborhood that suffered great damage due to hailstones as large as ice balls. The bill for repairing damage to my car amounted to no less than 4600 Euro. And as a famous footballer often runs as a slogan "every disadvantage also has an advantage". That hailstorm also gave me an advantage in addition to ruined fuchsias. Because probably it has given me, and also you, a hybridizing method that brings about less damage from yew of taxus beetles on the fuchsias. Presumably, because it still needs to be tried and I need help from other Fuchsia fans.

In an experiment with potting soil in 2008, I discovered a pleasant side effect of that soil.

But to start at the beginning, you must know that I have been a member of the NKvF Botanical working group for some years now. In my collection of botanical fuchsias I mainly have plants from the sections Fuchsia and Hemsleyella and they are difficult to grow plants. They get easy root rot.

From 1986 to 1995 I was a member of the working group that tested fuchsias on winter hardiness on a trial field at "Kwekerij Overhagen" in Velp. During the first five years of testing, we covered the plants with beech leaves during the winter season. But the wife of the owner of the test field was not so happy about it because there were regularly leaves blowing from the test field through the back door.

From the fifth year of testing, we no longer covered the plants on the test field with leaves. However, this proved to have no effect on the survival, nor on its growth and flowering. 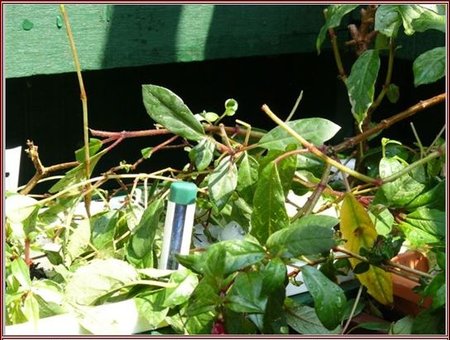 After the hailstorm of July 23, 90% of the leaves and the young branches of my collection of fuchsias were destroyed by hailstones as big as ice balls. 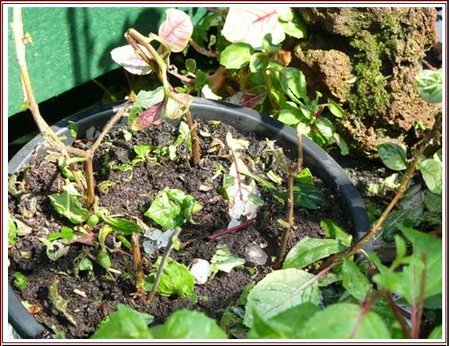 After the hailstorm, the defoliated 'sticks' had to run out again. Nevertheless, the plants have recovered well and several plants have even thrived.

After the hail damage on July 23, 90% of the leaves and the young branches of my plants had been knocked down or damaged (my botanical fuchsias stand without pots in planters). Nevertheless, the plants have recovered well and several plants have even thrived.

What stood out was that despite the fact that the soil was very wet due to rain, and the plants also took up little water since there were few leaves on the branches, no root rot arose. The plants that have died are plants that were damaged to the ground to such an extent that sprouting was no longer possible.

The flower boxes hang at a height of 1.40 meters and this is apparently the ideal height where yew beetles lay their eggs. In pots that are on the ground, I have rarely or never found larva of yew beetles.

Whether it is because of the fungus, or because of a substance that is in the beech leaf, that I do not find any larva in the trays, I do not know. But it is a fact that I did not find any taxus beetle larvae in it. 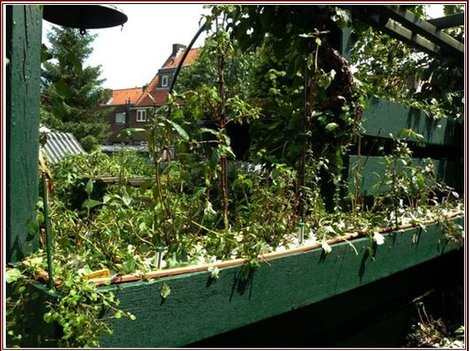 In these flower boxes of 2.30 m length, hanging at a height of 1.40 m, I have seen 50 to 60 yew beetle larvae for many years, none this year. Could this be caused by a dust in the beech leaf? 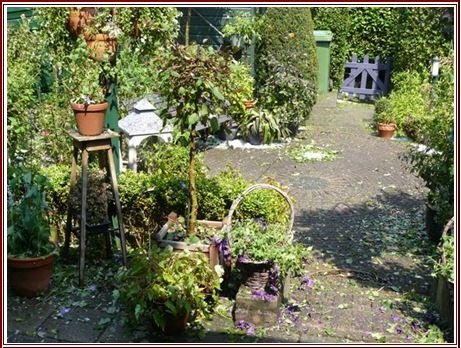 The plants heavily damaged by hail in my garden have recovered well in the summer and various plants have even thrived.

The advantages of a 'potting soil with mixed beech leaf' are:

1. it is a very light potting soil, so I have less problems with root rot.

2. about 1/3 less potting soil is needed and that is a nice financial saving.

3. so far no burden of yew beetle larva, but there still needs to be investigated or mixing

N.B. NB If there are fuchsia enthusiasts who want to help with this research, please contact Hans van Aspert, tel. 026/3512122, email van.aspert@12move.nl