All Dutch hybridizersof the old guard have sometimes worked with F. triphylla cultivars during their hybridizing work.

Of course with the intention to add something to the already large, classic range of triphylla cultivars that already existed. The color range in it was limited to orange, pink and red at the beginning of the last century and yet these hybridizers,

some of whom produced several triphylla cultivars, succeeded in establishing a name in this area too.

It should be noted that it was always one cultivar of every hybridizer that broke through worldwide.

By Egbert Dijkstra: 'Adinda', by Martin Beije: 'Triphy', by Arie Smits: 'Catharina', but the first to occupy a permanent place in the collections of triphylla cultivars was in 1990 Herman with 'Insulinde'.

This cultivar was created from the junction of 'Göttingen' with F. venusta. An impressive grower with beautiful bunches of dark red flowers and beautifully matching dark green leaves with reddish veins.

Of course you can expect from a hybridiser, from the caliber of Herman, that there are many more cultivars with a share of F. triphylla or a triphylla hybride in the pedigree. On closer inspection, there are even many cultivars from Herman where

But at the time in 1992, the compilers of the Cultivar inventory list decided the group of cultivars that descended from the successful crossing

F. paniculata x F.  triphylla separately as panthybrids and indicate this in the Cultivar list with the abbreviation "pt" instead of the usual "tr" for triphylla cultivars. 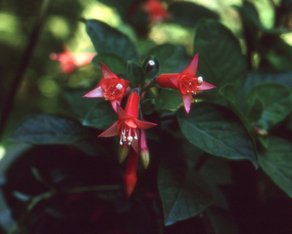 Cultivars with the in the family tree F. triphylla that Herman saw the light of life include: in 1985 'Maori Pipes':

F. excorticta x F. triphylla, first and foremost a special triphylla cultivar. Particularly due to the dark purple color of the flowers and the unusual inflorescence and one flower per armpit at the time, where most triphylla hybrids bloom in terminal bunches. In 1986 'Calumet' followed a crossing of 'Speciosa' and F. triphylla with pink-red flowers and orange in the crown. In the same year, 'Red Rain' was already mentioned for this during the 'Rosea' period.

In 1989 'Diny Hetterscheid' was a pendant with soft pink flowers, a cross between 'Göttingen' and 'Golden Glow'. 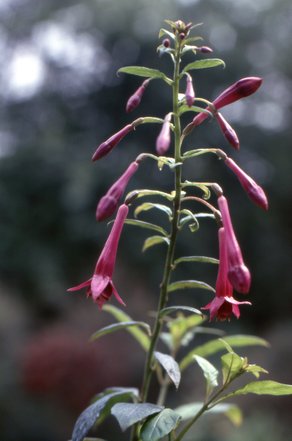 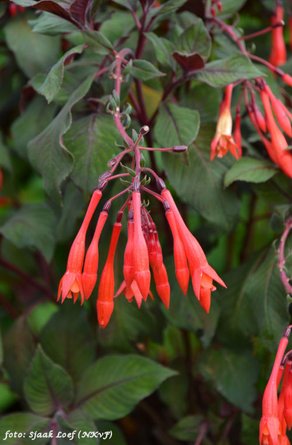 From the time-honored triphylla cultivar 'Göttingen' by Carl Bonstedt from 1905 it was assumed for a long time that it was infertile and therefore unsuitable for breeding work, until Herman together with his fuchsia friend Hans van der Post in his collection of triphylla cultivars, in which several copies of ' Göttingen 'were included, a specimen discovered that berries carried and thus was fertile. The 'Insulinde' mentioned above was won from the same 'Göttingen'. 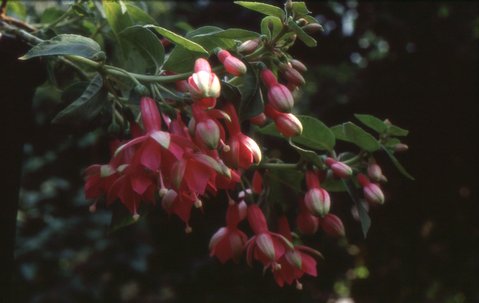 'Victorian Candlestick' was the last cultivar that emerged in 1992 from a cross with 'Göttingen'.

This time for 'Göttingen' the double-flowered cultivar 'Bicentennial' was the seed.

The name is derived from the shape of the rose red flowers that resemble a Victorian era candlestick. Whether this was an attempt by Herman to grow a triphylla cultivar with a double crown, who knows?

A cross between 'Göttingen' and 'WALZ Floreat' brought 'Ursula' to the spotlight in 1990.

'Ursula' had only a short life, the plant has quickly gone down to its own success to mention it.

The somewhat round flowers that differed for a triphylla cultivar appeared so massively to the plant that many a fancier lost their lives. The problem was that the flowers never disappeared, the plant took no notice of the seasons and did not fade away which made the propagation by cutting virtually impossible. 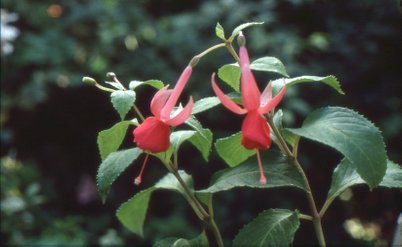 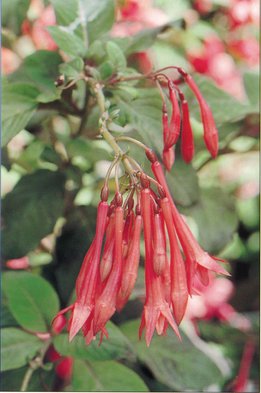 This cross between 'Thalia' and F. fulgens var. gesneriana by Edwin Goulding from 1985 is a sturdy grower with very large leaves and also large, dark red triphylla flowers.

A richly flowering specimen gives an impressive impression and logically forms a challenge for a hybridizer who owns such a plant.

In August 1997 Herman brought 'Hidden Treasure' to the judges: a cross between 'John Maynard Scales' and 'Marcus Graham'. The plant was approved with praise from the jury.

The large orange-pink flowers of which the sepals stick together with the points when opened as a Chinese lantern were amply sufficient for the "Certificate of Merit" and undoubtedly the degree of difficulty of working with "John Maynard Scales" will also have led to the plant received the note "Praise from the jury". 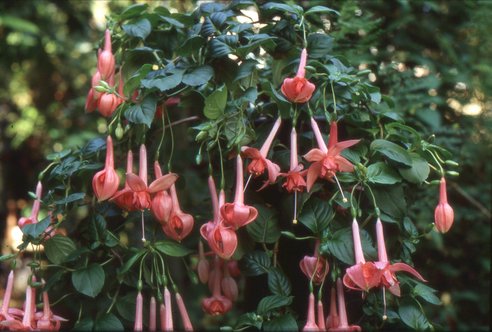 That John Maynard Scales is not an easy plant for hybridizing, Herman was also clear in the long run.

For several years there was a cross with 'John Maynard Scales' with Herman in the greenhouse.

The flowers had such a size that they evoked unbelievable length and thickness in the fuchsiasphere. Unfortunately, in spite of all his knowledge, a hybridizer is also dependent on a bit of luck. Only a few flowers came to the giant plant every flowering season. 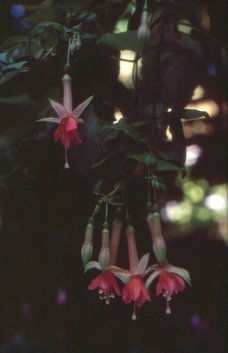 'Garoeda': ('Insulinde' x 'Smokey') was the triphylla cultivar which was approved at the inspection in 2002. The bunches of waxy pink-red flowers with a smoky hint on the petals the plant a distinct appearance.

In 2000 and in 2003 two cultivars 'Brillant Star' and 'John Wright' appeared, with one 'Göttingen' representing a small part of the family tree and the other F. triphylla predominant.

Both were crossings where the average home garden and kitchen hybridizer, in so far as he already had the required species, would lose his courage after the first year. With all-round hybridizers such as Herman, this is different, because if you have species you have the basis for making real novelties. You can use it and discover what is possible with that species. 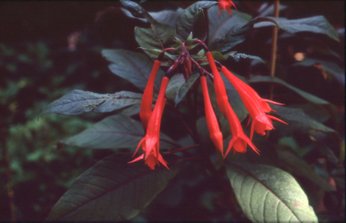 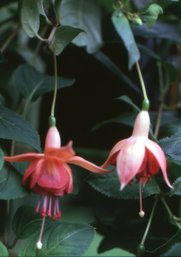 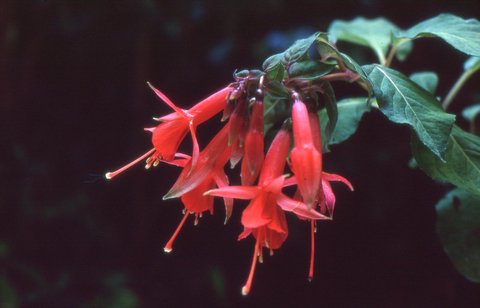 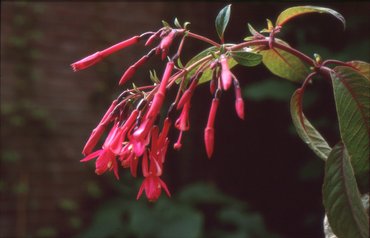 This is clearly the case with the cultivar 'John Wright'. This cultivar by Herman named after the English breeder John Wright has a pedigree of no less than 6 different species.

Seed parent is F. boliviana with as a pollen parent:

In the other cultivar: 'Brillant Star' use was made of

Both crossings resulted in very special cultivars. Especially the cultivar 'John Wright' was very successful in England, the original cradle of fuchsia hybridizers.

Read more on: 6 The dish-shaped cultivars