Aubergine as color denomination is common in the fuchsia rings. But since aubergines are fruits that are available in different colors, in most descriptions of fuchsia cultivars now dark color names are used such as dark purple, dark redpurple and dark red.

At the time, hybridizers were not specifically hunting for the color Herman was the first to give the color denomination aubergineplant. No they tried to capture the dark colors, as they appeared in the New Zealand species, in new cultivars. Especially F. excorticata was used to achieve that goal. A few used F. presscandens as a crossplant. 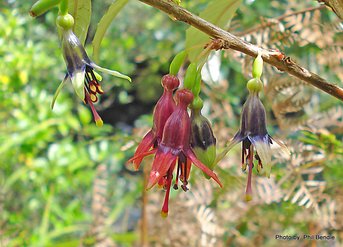 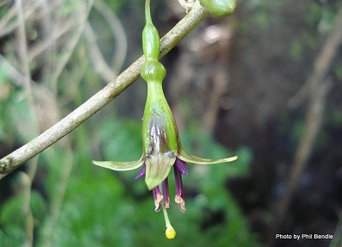 Here and there the hybridizers made some steps in the direction of dark labels. The first cultivar of Herman where the colors so desired, 1983 'Highland Pipes' a cross of F. magdalenae with

F. excorticata with a completely new color for that time in the Netherlands.

This cultivar was also available in the Netherlands, first under a wrong name but later the correct name was still used.

Strangely enough, there was little or no interest in this cultivar in England, there was more interest in our country but later it disappeared again.

'Foolke' was approved in the Netherlands. This cultivar also turned out to be very fertile with the result that in the early 80's a boom of single-colored flowers was hybridized with all 'Foolke' as one of the parents. Everyone opted for the easiest way and thus used the work of someone else. 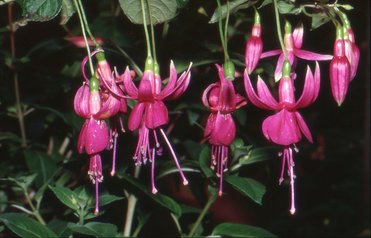 hybridizers such as Herman, who had been searching for darker colors for a long time, kept the credit to themselves and continued the already chosen path to dark colors, which ultimately led to results. With the expertise gained in his career as a hybridizer and in the search for dark colors, Herman knew that the large selection of single-colored single or double aubergine cultivars, which often seemed very similar to each other, could not be added much more.

So new color combinations and shapes had to be created if you wanted to distinguish yourself in this area.

One of the first results was the aubergine colored cultivar of Herman 'Zulu Queen' from 1987. Before the crossing Herman used his experience with 'Rosea' (F. lycioides x F. magellanica) and by crossing it with F. excorticata he obtained a pendant with ornate flowers, the sepals of which are slightly purple-red with slightly darker purple stripes on the top, the very dark petals give a nice contrast. 'Zulu Queen' turned out to be very fertile and given Herman's experiences with 'Rosea' the seedparent of 'Zulu Queen', Herman realized that this plant was very suitable for growing several aubergine-colored cultivars with a larger variety of flower shapes and color combinations. 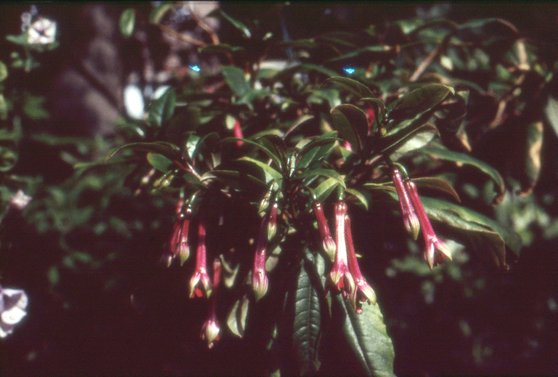 ‘Haute Cuisine 'was the first cultivar in which Herman used his own base plant' Zulu Queen '.

Crossed with 'Seventh Heaven' this resulted in the first double aubergine-colored cultivar of which the petal leaves show a dark red hue when raised in filtered light.

'Haute Cuisine' became especially popular because the plant was very easy in culture and because of its perfectly shaped flowers that stayed on the plant for a long time and were beautifully colored when they bloomed.

In addition, their petals also curled up gracefully.

The botanical crossing between F. excorticta and F. venusta resulted in 1987

'Dark Venus' is a dark half-pendant with long dark red tubes that are slightly brown at the base. The yellow green dots on the sepals give a cheerful note to the many flowers.

The same year, 'Purple Rain' was also approved, again one

'Rosea' x F. excorticata crossing with a somewhat fragile flower with pleated dark petals.'Fuchsiade `88' named after the regional show that was held in a garden center in Lisse in that year had as parents 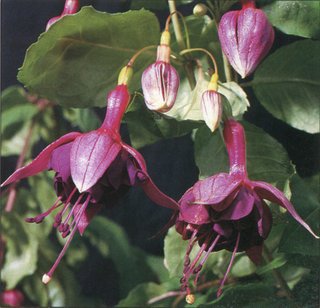 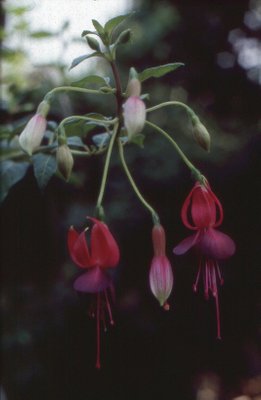 'Foolke' crossed with 'Lord Byron' gave a plant with dark purple-red colors with beautifully shaped flowers, the crown of which is three-quarters and the sepals are nicely repelled against the tube.

'Gerharda's Aubergine' ('Lord Byron' x 'Foolke'), the name indicates it was entirely focused on the color of dark aubergines.

With stiffly pointed sepals and the very dark crown this cultivar added another dimension to the assortment in this color.

The New Zealand species F. perscandens was used by Herman as a seed parent, and as a pollen parent he used the in culture not easy F. magdalenae, this unusual botanical crossing yielded 'War Pipes'.

Whether Herman wanted to give the first part of the name, the English word for war, that it was a fight to bring about this crossing, or whether he wanted to refer to the struggle in the hybridizers' world to market as many aubergine-colored cultivars as possible. we'll just leave that in the middle.

But it was true that the fuchsia lover with 'War Pipes' could add a botanical cross to his collection which, despite the input of F. magdalenae, is a very easy plant. The bunches of long dark tubes, the square shaped crown and the striking yellow green inside of the sepals make it an attractive plant. 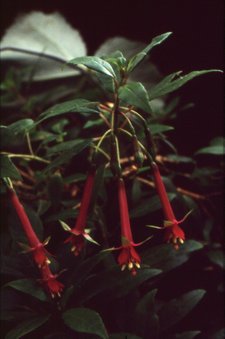 Who does not know him 'Purge'?

Almost the most common aubergine cultivar in the collections of the lovers during the relatively short period in which aubergineplant-colored cultivars were a fad. But this crossing of Herman between 'Rosea' and 'Foolke' from 1989 is still to be found in the collections and on shows and creates a separate frivolous note between the differently colored fuchsias.

Just something that belongs in a collection. 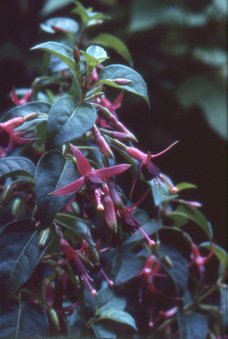 The basic plant on aubergine-colored area of Herman 'Zulu Queen', crossed with himself, gave in 1990 two more offspring that were approved namely 'Zulu King' and 'Mirjana' with its closed crown.

A white chalice and aubergine crown are an excellent combination to serve as eye catcher. That was what most hybridizers did not think of at all. One was only out on dark or as dark as possible and then if it can be somewhat colored. Herman made this combination possible in 1992 by the crossing 'Zulu Queen' x 'Cookie' and gave this eye-catcher the name 'De Berckt'. 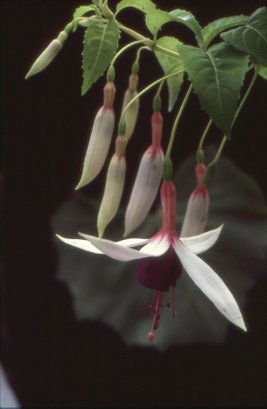 It was only a short period in which both lovers and breeders had aubergineplant fever. Many aubergine-colored cultivars are no longer found in the collections of fuchsia lovers. It was therefore somewhat hilarious when recently a fuchsia enthusiast who had been growing fuchsias for some time visited an open garden in which a beautiful crown tree of Herman's 'Purple Klokje' was exclaimed: "Are those colors also available in Fuchsias!"

Read more at 8: The master class period, the pantry hybrid.